Advance your career and business with the knowledge gained from each issue. 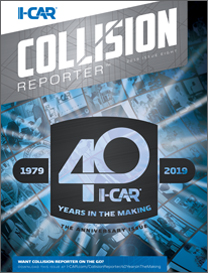 40 Years in the Making

I-CAR is celebrating their 40th anniversary with a special expanded edition of Collision Reporter focused on the past, present and future of I-CAR and the collision repair industry.

In this issue, you will find:

John Van Alstyne
CEO & President
I-CAR
As CEO & President of I-CAR®, VanAlstyne is leading the company into the future as the automotive collision repair industry’s standard for technical-focused education, knowledge and solutions that directly contribute to providing complete, safe and quality repairs for the ultimate benefit of the consumer. Prior to joining I-CAR, Van Alstyne spent twenty years in the OEM and vehicle technology sector of the automotive industry. Most recently, he was with Fisher Coachworks, a Detroit-based electric vehicle start-up. Earlier he was with Ricardo, a top global powertrain and vehicle engineering consulting firm, and Freudenberg-NOK, a global Tier 1 OEM parts manufacturer. Complimenting his depth in automotive technologies, VanAlstyne earned an MBA from Michigan State University, a Marketing degree from Western Michigan University, and is Lean Systems certified.

Clark Plucinski
Executive Director
Collision Repair Education Foundation (CREF)
Clark Plucinski began his nearly 50 years of industry experience as a collision repair technician, and a short three years later, went on to become co-owner and president of BCP Auto Body, Inc. Plucinski held this position until 1996, when he became executive vice president of sales and marketing for True2Form. In August 2012, Plucinski left this role to become executive director of the Collision Repair Education Foundation (CREF), a position he continues to hold today. Plucinski has held various board seats within CREF, CAPA (of which he is chairman), I-CAR and the ASA Collision Division Committee. He has also served as president of the Washington Metropolitan Auto Body Association, and has received the I-CAR Founder’s Award and Chairman’s Award, the ASA Special Achievement Award, and was elected into the Hall of Eagles.

Bob Jansen
Senior Instructional Designer (Retired)
I-CAR
Bob Jansen, a member of I-CAR’s “’89 generation,” started his career as a broadcast journalist. After leaving the field, Jansen decided to train at Fox Valley Technical College, taking classes in electronics, welding, robotics and technical training. After Jansen’s electronics instructor introduced him to I-CAR Tech Center Manager, Steve Nagy, he was offered a job, and never looked back. The position grew into a perfect fit, and Jansen produced I-CAR courses for over thirty years. In 2019, Jansen retired from his position as senior instructional designer for I-CAR. In addition to his work designing courses, Jansen has used his broadcasting background to serve as “the voice of I-CAR,” for nearly a decade, narrating or appearing in many of I-CAR’s training courses.

Doug Roach
Founder/Owner
Collision Repair Specialists
Doug Roach—the founding owner of Collision Repair Specialists—is one of I-CAR’s most productive, long-term, and successful educators. Since the development of unibody (frameless) automobile design in the early 1970s, Roach has been at the forefront of collision repair technology education nation-wide. Since 1974, he has been a consultant to I-CAR in the development of I-CAR training programs. Roach has trained thousands of technicians and insurance appraisers from virtually every state and Canada in how to properly restore damaged vehicles to pre-accident condition. Doug has been the recipient of multiple awards for his excellence in training including ASE Master Technician Certification, I-CAR Instructor of the Year, I-CAR’s ‘Most Students Taught’ award, and I-CAR’s highest collision repair industry award designation as a ‘Platinum Individual’.

Jeff Hendler
Owner/President
JD Hendler and Associates
Jeff Hendler has over 40 years of experience in the collision repair industry. In addition to serving as administrator to CIC since its inception, Jeff has also served as chairman of CIC; executive director of the Autobody Craftsman Association; and chairman of the Society of Collision Repair Specialists (SCRS). Throughout many years, he has been recognized as a founder of the CIC, I-CAR, SCRS, Hall of Eagles and CIECA, in addition to the NABC and CREF Golf Outings. In addition to his administrative services, Jeff also acts as a consultant for collision repair businesses and as a speaker and instructor at seminars, workshops, and national conventions for a multitude of worldwide industries. In 2001, the Collision Repair Specialists of Australia presented Jeff with the association’s award for “Exemplary Achievement.” In addition to this, Jeff was inducted into the Australian Lifetime Achievement Awards, the only non-Australian to receive this honor.

Jeff Silver
Co-Owner
CARSTAR Mundelein
Jeff Silver has over 50 years of experience in the automotive industry, starting at General Motors, where he was an automotive safety engineer. He then earned his MBA before joining Blackhawk Automotive, where he helped introduce new measuring and welding processes to the U.S. market. This led to his involvement with I-CAR, where he became executive vice president in 1985. Leading the I-CAR team for the next 11 years, Jeff would lay the foundation for what is now the industry standard for collision repair training. In 1996 Jeff and his wife Jeanne began the Illinois-based business, CARSTAR Mundelein-Butterfield. The shop is a longtime I-CAR Gold Class business and winner of The Russ Verona Memorial Award. Jeff is also an I-CAR Platinum Individual. In honor of his dedication and service, I-CAR created the “Jeff Silver Award” for those individuals who have held the I-CAR Platinum designation for at least five years.

Chuck Sulkaka
Executive Director (Retired)
National Auto Body Council
Chuck Sulkala has undoubtedly made a profound impact in collision repair. In 1968, Sulkala started his career in collision repair as president of ACME Body & Paint Co., Inc., a position that he held for just over 40 years. During those four decades, Sulkala was also Chairman of the I-CAR board, and Trustee Emeritus of the I-CAR Education Foundation, a position he still holds today. Sulkala also collaborated with colleagues to establish the National Auto Body Council in 1995, and is still serving as the board president and the organization’s only executive director to date. He is the recipient of lifetime achievement and humanitarian awards from numerous organizations throughout the collision industry. He was also named Honorary Life Member of NABC, is a Hall of Eagles recipient, and Automotive Body Repair Network (ABRN) recognized him as one of the Collision Industry’s 25 Movers and Shakers of the 20th Century.

Lori Barrington
Associate Vice President, Delivery
I-CAR
Lori Barrington, Associate Vice President of Delivery at I-CAR, has devoted her 30+ year career to transforming I-CAR into the automotive collision repair industry’s standard for technical-focused education, knowledge and solutions that directly contribute to complete, safe and quality repairs for the ultimate benefit of the consumer. Throughout her career, Barrington has led—or played a key role in—virtually every major I-CAR project or initiative connected to I-CAR’s 30,000 ft. Tech Center in Appleton, Wisc.,—the organization’s hub of training innovation. In her current role, Barrington leads the I-CAR Delivery Team in its efforts to provide training and services to the Collision Repair Industry, focusing on furthering the capacity, processes and systems in support of the Industry’s growing and evolving training needs. Prior to joining I-CAR, Barrington helped to complete curriculum design and layouts for the Quality Academy of Appleton’s Fox Valley Technical College.

Email us your thoughts at
editor@i-car.com