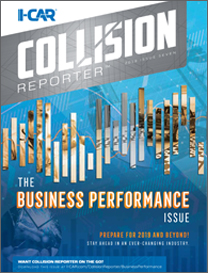 Get prepared for 2019 and beyond! With unique insights and information, I-CAR’s Collision Reporter is dedicated to helping you stay ahead in an ever-changing industry.

In this issue, you will find: 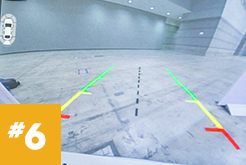 ADAS: REVERSING SEVERITY/SPEED OF CRASHES - FOR NOW...
ADAS-equipped vehicles tend to reduce the severity/speed of crashes, on average. Into the future, this trend may reverse; fully autonomous vehicle crashes will be fewer, but collisions may be higher-speed. Also, if a human is not driving, but rather all the passengers are rear-facing, it is much safer in frontal collisions (and account for 60% of crashes). –– Matthew Doude, Associate Director, Corporate Engagement, Center for Advanced Vehicular Systems, Mississippi State University. 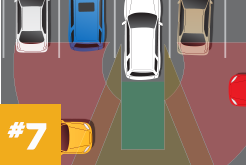 TELE-MATICS WILL ACCLERATE THE CLAIMS PROCESS
High-tech cameras, 3-D mapping and real-time, “dash cam” information centers are rebooting the claims process. In the future, within 30 minutes of a collision, parts be ordered and shipped to a shop, arriving before the vehicle. - Dan Langford, Nevada Center for Advanced Mobility, Nevada Governor’s Office of Economic Development 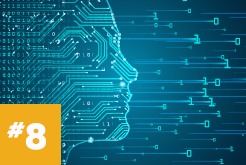 ARTIFICIAL INTELLIGENCE REIMAGINES VEHICLE INSPECTION
Get ready for the vehicle inspection process to radically change by automating processes, standardization of inspections and reducing resources. New services are enabling automatic detection of a wide variety of mechanical issues, as well as damages to the outer frame of any vehicle, through AI. – Amir Hever, CEO and co-founder of Ueye.

For a video of the complete showcase, featuring all 10 presenters, click here.


Becky Taylor got her start in the collision repair industry in 1996 as the secretary for Laird Noller in Lawrence, Kansas. Becky quickly climbed the ranks, becoming assistant manager after 3 short months, and moving into the manager’s position in 2001. Becky has been involved with I-CAR since taking her first class in 2000. She has also served as the Topeka Kansas I-CAR Chapter Committee chair for the past four years, and is currently a member of I-CAR’s National Volunteer and Instruction Advisory Council.


Darren Ranstrom had worked for U-HAUL Company of central Florida for 13 years when he made the life-changing decision to help his friends grow their business. In 1994, he started as a detailer at K and J Customs, an Orlando-based single-family shop. While starting out as a favor to a friend, Ranstrom found his passion for collision repair, and worked up the ladder to manager until Gerber Collision and Glass acquired the shop in 2012. Since then, Ranstrom has served as both general manager and estimator at two locations in the Orlando area, before relocating to Western North Carolina as an estimator. Ranstrom first became involved with I-CAR in 1996, and is now a Platinum-level estimator. His shop has been Gold Class since 2006.


Ronald (Ronnie) Goss, owner of Goss Autobody, has been in the collision repair industry since before he could even hold a wrench. Goss Auto Body was started in 1964 by his mother and father, who passed on the business to Ronnie in 2010, making him a second-generation business-owner. Ronnie is heavily involved in the industry even outside of his shop, serving as the secretary for the Wisconsin Auto Collision Technicians Association LTD (WACTAL), and on the advisory board at Fox Valley Technical College. Ronnie is an I-CAR committee volunteer, and his shop has been I-CAR Gold Class since 1993.


Dan is the current vice president of Quality Repair & Market Development at CCC Information Services. Dan began working in collision repair at an early age, starting his career in a family-owned-and-operated body shop in Chicago. Here he learned how to repair cars, and later how to manage day-to-day operations. Upon leaving the family business, Dan furthered his career in the industry by working as an automotive refinish sales and service representative for BASF and later as a project manager for CCC Information Services. He spent 8 years as the President of the Society of Collision Repair Specialists. Most recently, Risley was the President & Executive Director for the Automotive Service Association (ASA), before returning back to CCC Information Services.
Over his career, Dan has participated on several other committees and Boards in the industry such as the Database Enhancement Gateway (DEG), State Farm Advisory Council, Telematics Task Force, Automotive Management Institute (AMI), Collision Industry Conference (CIC) Database Task Force, Taiwan Aftermarket Parts Task Force, National Auto Body Council (NABC) and Certified Aftermarket Parts Association (CAPA).

Email us your thoughts at
editor@i-car.com