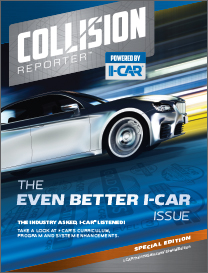 SPECIAL EDITION
The Even Better I-CAR Issue
The industry asked and I-CAR listened. This issue takes a look at I-CAR’s curriculum, program and system enhancements, including:

Experience as an ISAC Member –

Importance of the ISAC Roles –

Variables Driving the Need for Changes –

Changes will Benefit the Industry –

Excitement on The Even Better I-CAR –

Amber Alley
General Manager
Barsotti’s Body & Fender
Amber Alley has held various positions over her 25-year-long career in the Collision Repair industry. Amber is currently the General Manager of Barsotti’s Body & Fender in San Rafael, California, a position she has held for over 15 years. Amber is very active in the industry as an I-CAR ISAC member, the treasurer for the Society of Collision Repair Specialists’ executive committee, and as a member of the Collision Industry Conference Insurer—Repairer Relations Committee. She has also participated on the Nissan Certified Collision Body Shop Advisory Board.

Bill Condron
Fixed Operations Director
Sawgrass Ford
Bill Condron brings a wide range of industry knowledge and expertise to his role as an ISAC. Bill started in the business in 1978 as a car prep, and quickly transitioned to a painter—a position he held for 18 years.  Bill has worked for Ford Motor Company for the majority of his career, and started at Sawgrass Ford in 1993. Bill joined management with Sawgrass Ford in 1995, and became the fixed operations director in 2014. For the last six years, he has enjoyed working with his son in the industry.

Bill has been an avid supporter of I-CAR for thirty years, beginning his I-CAR training in 1988, and working his way to platinum recognition. He is also ASE master tech certified. Bill has been an ISAC committee member since ISAC’s inception in 2011.

Mark Williams
President
Williams Auto Body
Mark Williams is president of Williams Auto Body shop in Green Bay, WI. He is very active in his community, serving on the Ashwaubenon School Board for 26 years, and as a Village Trustee for 12 years. Mr. Williams also serves as an advisory member for several community boards: Einstein Project (STEM) Executive Board, NWTC Automotive Repair Advisory Board, the state of Wisconsin Auto Technician Association as Vice President, and I-CAR’s ISAC Board.

Notte holds a Bachelor of Science degree in Accounting from Bentley College located in Waltham, Massachusetts.